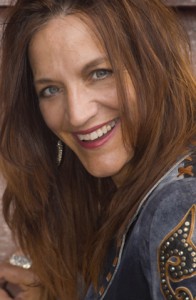 Karree was born in Northern British Columbia, Canada. She was raised on a ranch off the Alaska Highway,
on mile 49, in Fort St. John, B.C.
The instruments she plays includes Acoustic and Electric Guitar, Maracas, Tambourine, Spoons,
and other assorted percussion instruments including bird calls.
Her career began at 19, as part of the New Canadian Sweethearts with Bob Regan.
They toured Canada and the U.S. for six years.In Los Angeles she formed her own group, Karree J. Rose and the Ramblers.
She performed at the Palomino Club and Naval and Air Force Bases.
She has appeared with artists such as Boy Howdy, Eddie Dean, Cliffie Stone, Vern Gosdin,
Freddie Hart, Del Reeves and Highway 101 with whom she recorded her first album. Recorded in
Los Angeles, CA. the album featured a song by Billy Swan entitled “Leaving You Is On My List
Of Things To Do Today”. Swan helped produce and performed backup vocals on this track.After tours to Canada, California, Branson MO, and Denmark, Karree decided to move to the
home of country Music, Nashville, Tennessee.
Her first Nashville project entitled, “Pure Energy” was produced by the legendary
Norro Wilson and engineered by Billy Sherill. The CD landed her with a #2 Independent
hit with the song “Dog On the Dash.” It allowed her to perform at the biggest
Scandinavian festival in Silkeborg, Denmark along with Billy Jo Spears
(Blanket on The Ground.) The tour cemented her European presence into star
status providing annual tours.

Her CD, “Pieces of my Heart” showcases her writing talents and
versatility and features her eleven-year-old daughter Savannah, (six years old at the time)
s Karree’s current song, “Married Man” is included on the line dance CD’s throughout Denmark and is
climbing the Independent charts.

Karree’s latest song Right Turn went No. 1 on the Independent Charts written with legendary Gerald Smith (HeeHaw, What Part of No Don’t You Understand.) Her song “Alaska Highway” is being featured on an upcoming program, “RoadTrippin’ the ALCAN at 75” being produced by KTUU-TV, the NBC station in Anchorage, Alaska.The show will be broadcast on KTUU-TV/KYES-TV. A compilation of films from their 10 day road trip driving the Alaska Highway
She resides near Nashville on her horse ranch and performs with her band “Totally Hot”,
on the local club circuit.
She tours Canada and just returned from her tenth European tour to Denmark.
Karree j Phillips